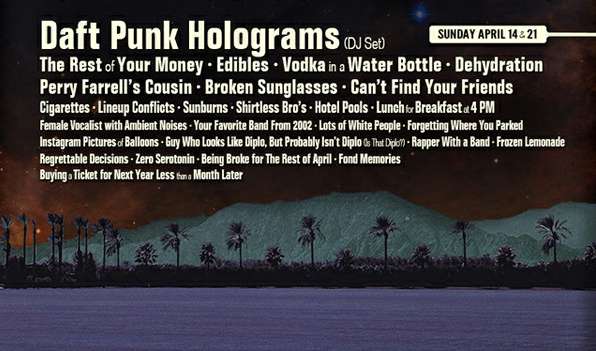 The Fake Coachella Line-Up Poster is Full of Mockery

Jennifer Gosnell — May 23, 2012 — Pop Culture
References: funnyordie & refinery29
Missing Coachella already? All the drama, holograms and boho-chic style? Well since tickets for next year's line up go on sale this week, check out a hilarious parody of it to soothe the fact that you may not be going. Without an actual confirmed roster of musicians and acts, the presumptive festival is already selling for next year to die-hard music fans who go in with the expectation that whoever it is will be good.

With band titles like “A long car ride,” “Unemployed college graduates” and “Bathing suits like they were normal clothes,” the contents of the hilarious spoof are actually spot-on for the festival, not that this makes anyone love it any less. As a pure win, the satirical Coachella poster by Funny or Die hits it big as both a great joke and an encompassing notion of the event itself.