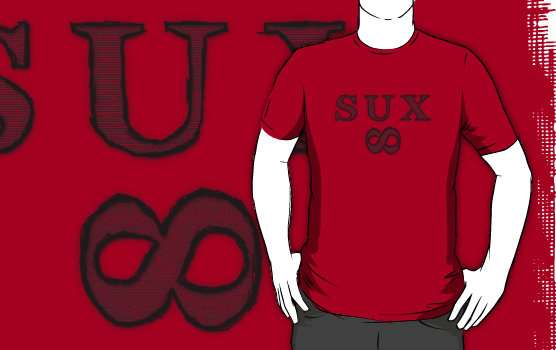 Jason Soy — August 30, 2011 — Fashion
References: redbubble & facebook
Share on Facebook Share on Twitter Share on LinkedIn Share on Pinterest
Fans of 'Scott Pilgrim Vs. The World' are sure to feel right at home wearing one of these 'Everything Sux' t-shirts. After all, who can forget that memorable scene in which Scott Pilgrim feels overwhelmed by his whole fighting-seven-evil-exes-for-Ramona situation and declares, using refrigerator magnets, that "Everything sucks?"

The 'Everything Sux' t-shirts come courtesy of Emma Harckham, who designed the shirt to be sold over on RedBubble. Even though the t-shirt doesn't feature any Bryan Lee O'Malley artwork, true Scott Pilgrim devotees will instantaneously recognize the reference as soon as they see it.

Implications - Consumers have an affinity for pop culture products because the allusions used in the products invoke empathy from consumers. Consumers feel they can trust companies that share similar interests to themselves. As such, corporations may consider using pop culture catchphrases as design elements in their wares in order to entice consumer business.
2.6
Score
Popularity
Activity
Freshness
Access Advisory Services

Interactive Movie Previews
The 'Scott Pilgrim vs. the World' Trailer is a Classic Video Game
play_circle_filled