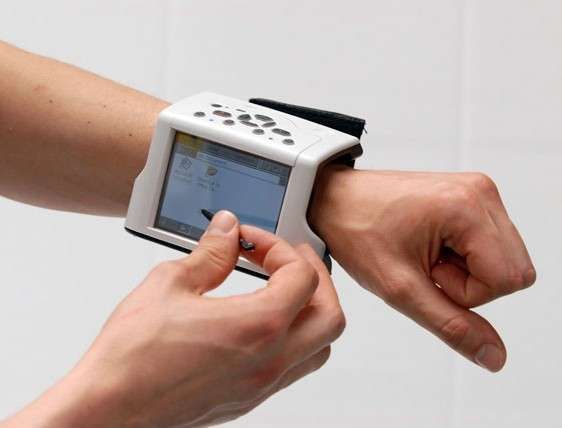 Running on Linux or Windows CE,It has a touch screen and navigation keys. The battery is said to have an 8 hour lifespan with a car adaptor and external power supply available, automatically switching into standby mode to save power if the users arm hangs down beside the body. It has a 400MHZ CPU, 64MB Flash Memory and a 3.5 inch screen.

The Zypad enables the user to work in a Hands Free environment that does not require a fixed position using GPS and Bluetooth/WLAN/GSM each with integral antennas for connectivity plus stereo audio.

Sales of the Zypad are mainly being targeted at emergency services, the military, healthcare and law enforcement agencies ( although there are a number of commercial functions possible) as the potential uses for this powerful device in these areas are numerous:

It is comfortable to wear even over clothing.

The Zypad could determine if a user is motionless or has fallen down and initiate a radiosonde beacon.

It can be used to warn users of invisible dangers such as toxic substances with the help of additional sensors.

Wrist Worn computers could be used to send and receive information to fire fighters or rescue services at disaster locations.

It could accurately read medical data worn by patients, quickly accessing databases, and preventing errors from mixed up medical records.

The Zypad can be used by the police to co-ordinate operations between the centre, vehicles and officers by maintaining a constant exchange of data.

Article quote:
Promising to revolutionise the way in which millions of people work, the Zypad's high-tech design is the culmination of circuit miniaturisation, a wide range of computer hardware functions, optimised power consumption and ergonomic considerations. Weighing only 290 grams, the device could conceivably serve as an everyday tool as common as the mobile phone or the palmtop.

The unit is expected to be priced at $2500.
3.8
Score
Popularity
Activity
Freshness
Get Better and Faster