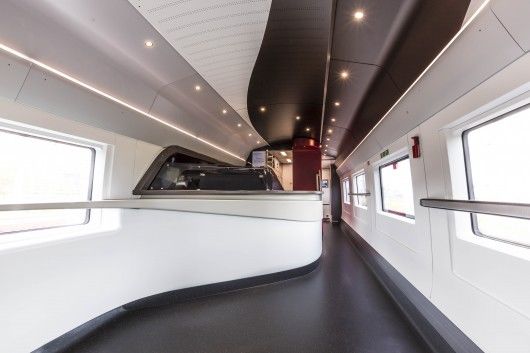 Rahul Kalvapalle — November 21, 2014 — Autos
References: eurostar & gizmag
The Eurostar e320 trains are part of a new high-tech fleet of trains that mark the 20th anniversary of Eurostar, which revolutionized train travel in Europe with its Eurotunnel that linked the UK to continental Europe.

The new trains, which are part of the Siemens Velaro line, can hit top speeds of 320 km/h, making them 20% faster than Eurostar's other trains. The train also boasts a handsome length of 400 meters, giving it enough room for 900 passengers, again a 20% improvement over other Eurostar trains. This is possible because the train's propulsion system and technical modules are located beneath the train compartments.

The train is also quieter and is designed to minimize the 'tunnel boom' caused by the compression and displacement of air that occurs when trains travel through tunnels.
3.5
Score
Popularity
Activity
Freshness