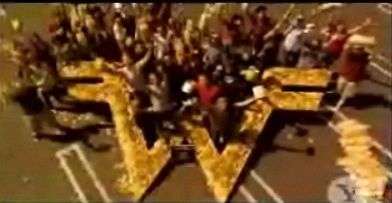 As you may recall, Weezer made a video for their song Pork and Beans featuring several internet “celebrities” such as Chris, Leave Britney Alone, Crocker a few months ago that went viral and was watched by an estimated 20 million people.

“During the shoot for the “Troublemaker” video, world records were officially set in various categories, including “Largest Game of Dodgeball,” “Most People in a Custard Pie Fight,” “Most People Riding on a Skateboard,” “Largest Air Guitar Ensemble” and “Longest Guitar Hero World Tour Marathon.” Additionally, the band’s drummer, Pat Wilson, appears in the video playing what is reportedly the “World’s Smallest Drum Kit,” which the band is petitioning Guinness to include as well.”

Televised Interactive Festivals
This Year, V Festival is Being Reimagined as a Broadcast TV Show