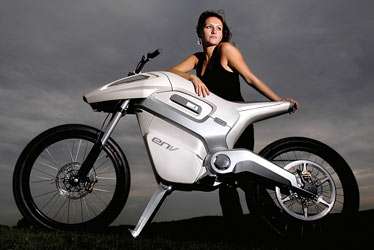 Cool Hunter — January 1, 2006 — Autos
References: envbike
It does not come with the woman. They just use her to promote the bike because fuel cell bikes don't sell themselves.

From the Intelligent Energy Website:
ENV says hello to the world

On Tuesday 15 March the story of ENV hit the UK news stands, with the first editions of London's Evening Standard carrying the first published story in print even before the press launch was concluded at London's Design Museum.

By the following morning the media frenzy was in full flow, including an early morning announcement on Radio 4's influential Today programme as well as slots on many local and national radio.

The story of the â€œsilent bikeâ€ was prominent in all of the UK press, including an appearance on the front pages of The Guardian.

Mainstream motorbike consumer weekly Motorcycle News featured it in a prominent double page spread while television broadcasts â€“ including Sky News - were spreading the story not just at home but also globally.

By the third post-press launch day enquiries were streaming in from quite literally all corners of the globe. Interest continues to grow apace as the world begins to realise the impact that this groundbreaking technology could have.

Orb-Shaped Cat Beds
The CATSOLE is a Comfortable, Safe & Decorative Place for Cats to Rest

105 Wicked Motorcycles
From Eco-Friendly to Model-Sporting, This Motorcycle Collection has it All