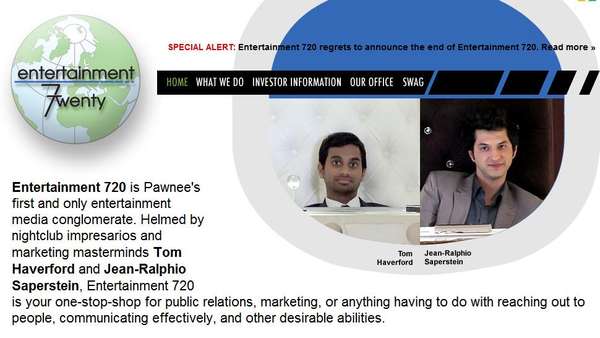 Jason Soy — November 8, 2011 — Pop Culture
References: entertainment720 & facebook
Share on Facebook Share on Twitter Share on LinkedIn Share on Pinterest
As quickly as Parks and Recreation’s fictional media conglomerate Entertainment 720 came into existence, so too did its announcement that, due to financial problems, the company started by Tom Haverford and Jean-Ralphio Saperstein must shut its doors to the public and declare bankruptcy. For those unfamiliar with the show, essentially what happened was two lovable, but naive characters came upon a large sum of money, started a major company, burned through all of their cash, and are now dead broke.

Utilizing the Entertainment 720 plot thread from the series even further, the clever marketing team over at NBC has released an official statement on Entertainment 720’s fake website. NBC has been periodically releasing social media-based promotional materials in order to generate interest in the critically acclaimed comedy, and by putting such great effort into giving fans humorous content, the company ensures it won’t be long before everyone jumps on the bandwagon to see what hilarity ensues next.
0.6
Score
Popularity
Activity
Freshness
Attend Future Festival