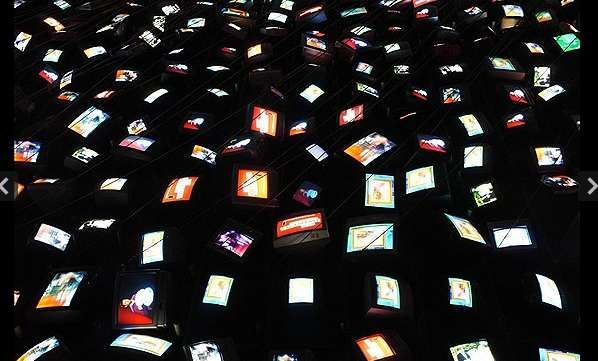 Jordy E — March 16, 2012 — Business
References: davidhallart & telegraph
Share on Facebook Share on Twitter Share on LinkedIn Share on Pinterest
David Hall’s ‘End Piece’ installation has been released this week at the University of Westminster’s P3 gallery. The exhibit speaks to a broad cultural shift from analogue to digital technology, a top down operation that will be enforced come April by the UK government.

The broadcast switchover represents a greater cultural phenomenon. With the rise of personal technology, users can now access information on their own terms. This is a significant break from the analogue communication age wherein viewers were dependent upon corporate television stations as their primary source for news and entertainment.

The End Piece display features 1001 analogue TV sets, all of which are plugged into the ceiling. The terrestrial station stream showcased by the sets will remind viewers of vintage technology. However, the official conversion from analogue to digital will occur on April 18th, meaning that the screens will no longer receive content. Hall has requested that the white screens be left on despite the conversion, a symbolic ode to this futuristic transformation.
1.5
Score
Popularity
Activity
Freshness
Attend Future Festival

Prankster Channel Changers
The Ninja Remote Can Control Any Television