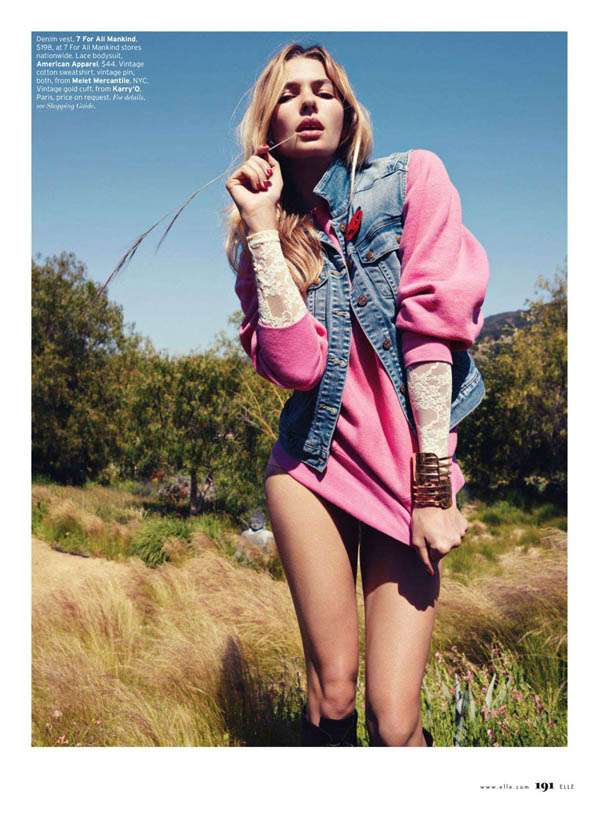 Jessica Hart is Americana Cool for ELLE US August 2011

Jordan Sowunmi — July 18, 2011 — Marketing
References: elle & fashiongonerogue
There are few things more standard or stereotypically American than denim and farmland, and the ELLE US August 2011 shoot takes us right into the heart of Americana.

The shoot features stunning 25-year-old Australian model Jessica Hart in a series of denim-heavy outfits from hip companies like 7 For All Mankinds, American Apparel, and Ralph Lauren, amongst others. This ELLE US August 2011 shoot was captured by Horst Diekgerdes, a photographer whose credits include many of the top fashion magazines in the world, including Harper's Bazaar UK, Vogue Germany, and GQ Style.

In the ELLE US August 2011 editorial, Jessica Hart shows how she earned a spot as one of the angels in Victoria's Secret's 2010 catalog by appearing alternatively casually coquettish and nonchalantly alluring. My favorite shot of the editorial features Hart playfully (and seductively) holding down the bottom of her pink dress while chewing on a loose string of hay. Her eyes are half open, adding to the picture's raw sex appeal. She dominates the page with an ease and naturalness that many models cannot.

Implications - One of the most effective ways for a company to sell a product is not by just focusing on the product's benefits, but by selling the company as a lifestyle. To hammer home this point, companies should feature non-verbal (and subtle) markers that help sell the brand's vision or company ideology. Distinctive locations, background settings, and weather are all important factors in connecting the company and the consumer.
3.8
Score
Popularity
Activity
Freshness