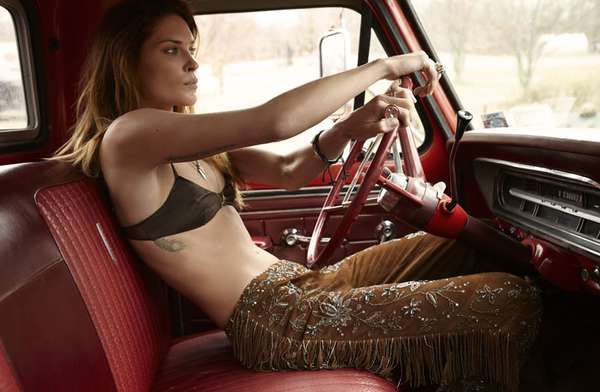 Erin Wasson is Hip and Hot for ELLE France June 2011

Shot by French photographer Fred Meylan, the Erin Wasson-ELLE France June 2011 issue sees the veteran model at a secluded cabin with only a dog as a companion. The photoshoot features Wasson in a series of diverse and stylish bohemian outfits, including a laid-back cool sweater, jean shorts and top hat combo, as well as a showy black romper, snakeskin boots and cardigan ensemble, both giving the international face of Maybelline the shine of sanguine hippie allure.

My favorite photograph of the shoot, however, features Wasson in the driver’s seat of a old school car, clad only in a black bra and tasseled brown cowboy pants.

78 Cali-Cool Photo Shoots
From Venice Beach to the Canyons, California Photography is Hot