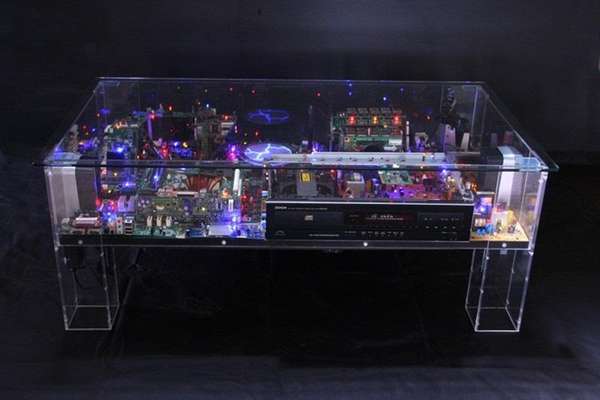 Meghan Young — October 2, 2012 — Art & Design
References: interior-design.wonderhowto & neatorama
If someone had to visualize the world of 'TRON' in real life, it would probably looks suspiciously close to the Electri-City Table. Forgetting about the lights for a second, the table itself is made up of a series of miniature people, streets and more, which is exactly what that digital existence would be like to humans. Encased in acrylic and glass, the Electri-City Table appears to have been sent down by geek heaven.

In reality, the Electri-City Table was created by Benjamin Miall Yates. He used old circuit boards and other electronic components to create a sprawling city diorama that people could get lost in for days. Creating various versions of the Electri-City Table, he has relied on everything from CD players and speaker systems to digital photo frames and PC computers.
5.9
Score
Popularity
Activity
Freshness