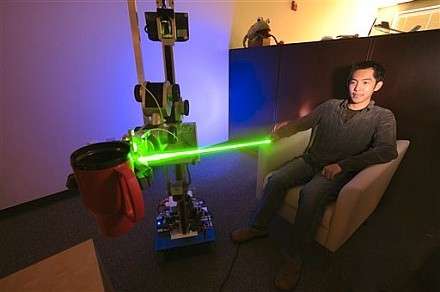 Ayman — March 12, 2008 — Tech
References: physorg
Share on Facebook Share on Twitter Share on LinkedIn Share on Pinterest
This is my kind of robot, not something that will take over our civilization and kill humans, just a robot to serve me and say cool catchphrases (such as "Bob is your uncle!") when it gets the job done. El-E is is not designed to behave like a human; rather, its aim and focus is interacting with us and grabs stuff you point at with a laser. The robot, which is developed by Georgia Tech and Emory universities was unveiled at an Amsterdam conference and will be tested this summer in a real-world setting involving patients with a degenerative disease.

To command the El-E, you point a laser at something for a few seconds. The robot then responds with a beep and then zeros in on the target, grabs the object and returns when the laser is pointed at the user's feet. It looks for a human face before handing over what it grabbed.