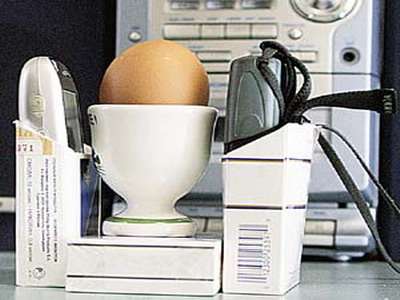 Bianca — May 31, 2008 — Tech
References: fun-genius
Share on Facebook Share on Twitter Share on LinkedIn Share on Pinterest
Two Russian journalists from the Pravda Newspaper in Moscow conducted an experiment in which they cooked a raw egg using their cell phones. If this experiment is real, it could finally be the visual proof people need to understand that cell phones really are dangerous.

Andrei Moiseynko and Vladimir Lagovski strapped put two phones on either side of a raw egg. They got the phones to call each other and placed a tape recorder near by to ensure the phones wouldn't go off due to a lack of sound.

After only 15 minutes, the egg felt warm due to the radio waves, within 40 minutes it was "very hot," and after just 65 minutes, it was actually cooked... although I don't know who would risk ingested anything cooked like this.