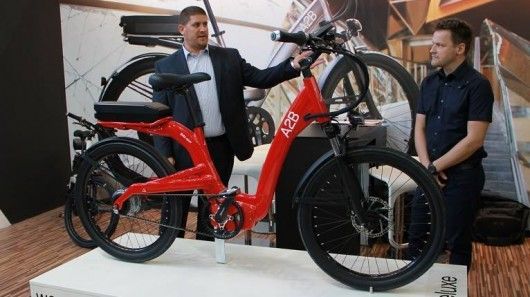 Rahul Kalvapalle — September 12, 2014 — Autos
References: wearea2b & gizmag
Share on Facebook Share on Twitter Share on LinkedIn Share on Pinterest
The A2B Entz e-bike -- named after the inventor of electromagnetic transmission, Justus B. Entz -- is equipped with a Continental e-drive system that offers a sharp electric-assisted ride. This e-bike is among the first to feature the Continental CONTI eBike drive system, which packages a motor, backlit display, remote control and battery into one light, small yet powerful package.

The motor pumps out 250 watts of pedelec power and can impact the rear wheel via either a Shimano Aifline eight-speed hub or the manual/automatic NuVinci Harmony gearless hub option.

The Entz e-bike will be launched in Europe in January 2015 and the US a couple of months later. Comprehensive pricing details have not yet been revealed, but it is expected that the standard model will cost $3,999 and the Deluxe will go for $4,999.
4.4
Score
Popularity
Activity
Freshness
Get Trend Hunter Dashboard