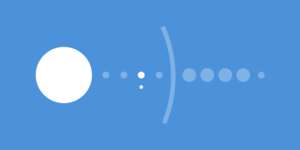 The series features a prediction of how the solar system will change and realign over time. Each flag has a blue background with the planets in Earth's galaxy illustrated in white. The designer also created similar flags that document the sun's changing positions over time.

The series designates where each planet, and the sun, will be up until 800 years into the future. The creator also made flags that showcase each individual planet in the solar system's evolution.

Earth/Solar Flags Throughout the Future by thefrek also includes illustrations that incorporate Pluto, which has been recently declared to not be a planet. However, given that this is a prediction into the future, perhaps he's on to something and Pluto will one day join the realm of the planets again.