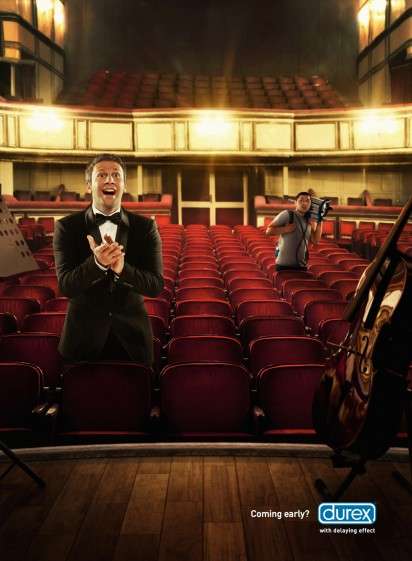 Meghan Young — May 25, 2012 — Naughty
References: eurorscg & ibelieveinadv
Share on Facebook Share on Twitter Share on LinkedIn Share on Pinterest
The Durex Coming Early? campaign hilariously alludes to the common occurrence of premature ejaculation. It does so by following three men as they arrive to an event that is not even close to starting. What makes the images even funnier is the fact that each of these men are thoroughly enjoying themselves despite their lack of company and the no-show affair.

Cleverly created by Euro RSCG, an ad agency based in İstanbul, Turkey, the Durex Coming Early? campaign was art directed by Serhat Akavcı with creative direction by Ediz Kurtbarlas. Captured by photographer Murat Süyür, the ad campaign is crisp, colorful and creative. While it might have people scratching their heads at first, as soon as they get it, they will hit the floor laughing.
4.8
Score
Popularity
Activity
Freshness
Get Better and Faster