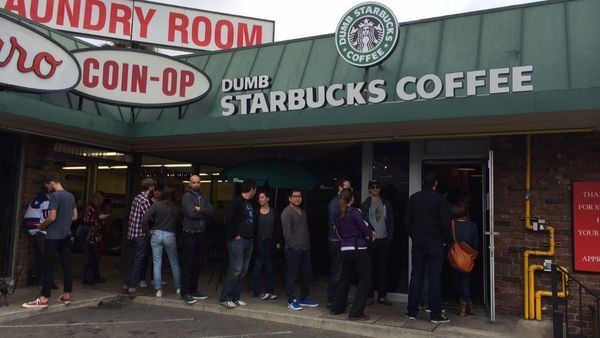 Laura McQuarrie — February 11, 2014 — Pop Culture
References: hollywoodreporter & mashable
Share on Facebook Share on Twitter Share on LinkedIn Share on Pinterest
This past weekend, a 'Dumb Starbucks' opened in Los Angeles and the lines to get a "dumb coffee" or a "dumb tea" were ridiculously long. It's unclear who is behind the mysterious project, but the mock coffee shop is perfectly on brand with Starbucks' logo, beverages and interior decorations, although its cash registers are only for appearance — coffees and pastries at Dumb Starbucks are reportedly free, although tips are appreciated.

Even though you can get coffee from Dumb Starbucks, the shop classifies itself as a work of parody. A FAQ inside the shop states: "in the eyes of the law, our "coffee shop" is actually an art gallery and the "coffee" you're buying is actually the art."

Despite its intentions, Dumb Starbucks is probably a lawsuit waiting to happen, so you might want to get in line for a "dumb espresso" pronto.
5.4
Score
Popularity
Activity
Freshness
View Innovation Webinars