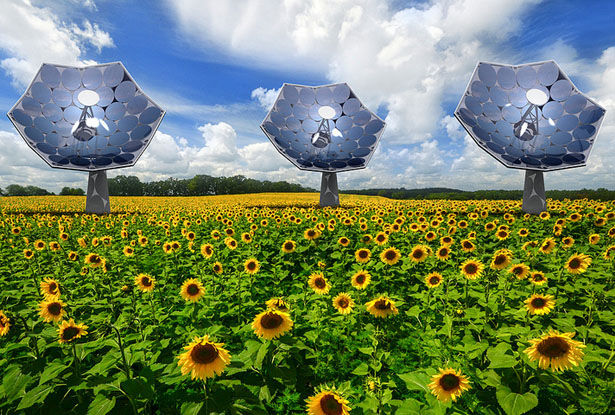 Amelia Roblin — October 6, 2014 — Eco
References: airlightenergy & tuvie
Without government credit schemes, solar panels are too expensive for the average homeowner's investment. The dsolar HCPVT project, however, aims to bring this technology to the middle class by 2017. Airlight Energy has been collaborating with IBM on an affordable solar power dish that resembles a sort of satellite.

Umbrella forms are efficiently molded from an economical fiber-based concrete, which holds a collection of circular solar cells in place. With an elevated sunflower shape and its parabolic curve, one unit can produce 20kW of heat and 12kW of electrical power on a bright day. On average, a dsolar HCPVT (High Concentration Photo Voltaic Thermal) dish may be able to generate enough power to maintain a comfortable home off the grid. Just imagine the reduction in planet-harming energy consumption that could result from its availability.
5.8
Score
Popularity
Activity
Freshness