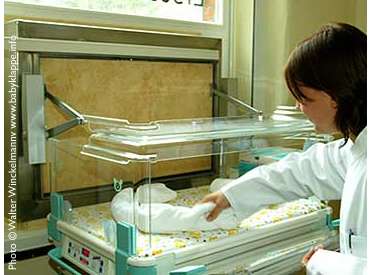 Kyla Schmidt — August 28, 2007 — Life-Stages
References: cnewsnoe & inventorspot
Share on Facebook Share on Twitter Share on LinkedIn Share on Pinterest
Last May the Jikei Hospital In Japan set up what they call the â€œStork's Cradleâ€ where mothers can drop off their unwanted babies. The baby hatch is equipped with an incubator, and is designed so people can leave newborns anonymously using a door outside the hospital. Staff are alerted after door is opened. A note inside urges people to contact hospital staff if they change their minds.
Apparently this baby drop zone has become quite successful- they've had 6 unwanted babies dropped off since it's conception earlier this year. Including 2 earlier this month!
According to Canoe.ca "The hospital created the drop box following a series of high-profile cases last year in which newborns were abandoned in parks and supermarkets, triggering a public outcry and government warnings against abandoning babies. The number of children raised at Japanese orphanages rose to about 30,400 in 2003, up 13 per cent from about 27,000 in 1998, Health Ministry statistics showed" and inventorspot.com says "An official at Jikei Hospital was quoted by Japan's Kyodo News Service as saying "Maybe there are some people who are suspicious about it, but we should not pretend not to see them and let them die. Babies are innocent."

Adapting to Digital
An Interview with Lauralee Sheehan, Founder and CCO of Digital55