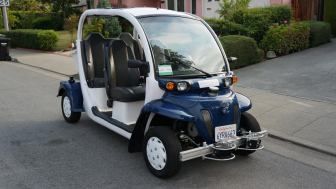 Katherine Pendrill — August 19, 2015 — Autos
References: aurobots & techcrunch
Share on Facebook Share on Twitter Share on LinkedIn Share on Pinterest
'Auro Robotics' is currently testing a fleet of driverless vehicles that help students get from one end of campus to the other. While several manufacturers are testing autonomous cars, these companies are often subject to strict government regulations about how and where these vehicles can be used.

Unlike autonomous cars, Auro Robotics' driverless shuttles are intended to be used in contained environments such as college campuses. The automated vehicles are designed to navigate heavy pedestrian traffic and safely transport students from one end of campus to the other. With so many unexpected situations to account for, the shuttles are equipped with cameras, GPS and radars, which allows them to respond to changes in their surroundings.