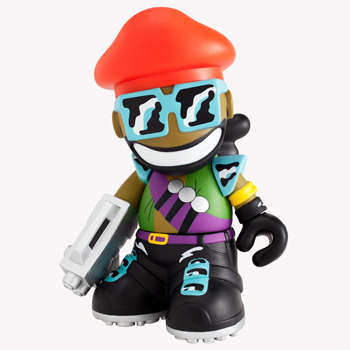 Tia Clarke — February 22, 2013 — Art & Design
References: majorlazer & magic-pony
This likeness of DJ Major Lazer celebrates the “Pon De Floor” singer in miniature 7” toy form. You might wonder why the Grammy award-winning singer is dressed as a soldier and has a laser arm weapon? Well, this figurine is a comedic depiction of the superhero version of the groove-busting DJ.

The fictional DJ Major Lazer Kidrobot is hilariously described as a “dance-hall nightclub owner from Trinidad, though in truth, he is a bad-ass Jamaican keeping the world safe from vampires and monsters, while partying hard and tweeting.” Don’t worry though, the real Major Lazer is back this year with an album due to be released this month entitled 'Free the Universe' with Diplo at the helm as producer. In the meantime, you can play with the Major Lazer Kidrobot.