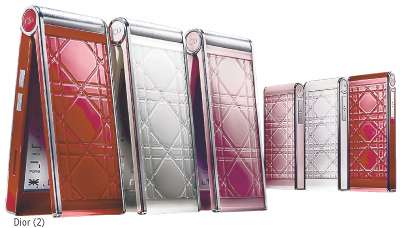 Besides the standard cellphone features (touchscreen, camera, multimedia) the Dior phone comes with a unique miniature sidekick, about the size of a USB key, which clips to the outside of a bag for easier access. The tiny companion device, which is dubbed My Dior, communicates with the main phone so that you can pick up or make calls with My Dior, and use the main phone for more complicated functions. It almost sounds like a fashionable bluetooth set that won't make you look funny.

The decision to branch into phones was driven by demand in new luxury markets such as China and Russia, Dior Chief Executive Sidney Toledano said in an interview, â€œWhat really convinced us was seeing the attention people in emerging markets pay to buying a phone, by selecting the color and design. In the same way that we have developed our watch and jewelry lines, we want to increase sales with the phone.â€

The $5,000+ price is notably much higher than Dolce & Gabbana or Giorgio Armani's phone which cost around $600, but Dior expects to sell at least 10,000 units a year at the beginning and projects annual sales of â‚¬200 million in the longer term. The phones will be made by a small French manufacturer, ModeLabs Group.
5.1
Score
Popularity
Activity
Freshness
Attend Future Festival