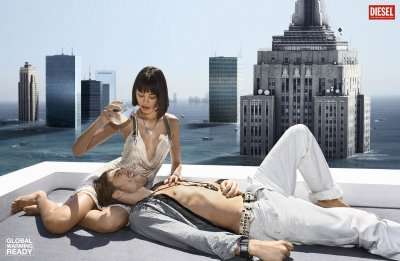 Rich — March 7, 2007 — Eco
References: diesel & theverychronicles.blogspot
Share on Facebook Share on Twitter Share on LinkedIn Share on Pinterest
Diesel's latest advertising campaign is timely to say the least. The campaign depicts a drastically changed world, altered by the effects of Global Warming. Taking on a long time serious issue, but one that has in recent months become a very 'hot' topic (no pun intended!).

The striking and sophisticated images are set in various locations around the world, each having succomb to the effects of Global Warming; From New York sky scrapers emerge from the ocean, with flood waters upto the 50th floor to more subtle interpretations, such as tropical parrots taking the place of pigeons as the native bird in Venice's fames St Marco's Square. In all of the images, shot by fashion bad boy Terry Richardson, the people (dressed in Diesel naturally), seem unperturbed by the new environment, and in most cases are enjoying the new warm conditions. When you first see the images they seem quite normal beautiful fashion images, but it is only on the second look that they reveal their true story. Initially the images could be interpreted as saying that Global Warming might just not be such a bad thing, but it doesn't take much to realise that the radical changes in the portraid environments can only underline the potential disasterous scenarios that could lay ahead. Considering that we are bombarded with tabloid style news with it's hyperbowl horror story approach, this is an interesting and more thought provoking way of bringing attention to the issue, but leaves the viewer the opportunity to draw their own conclusions.
6.1
Score
Popularity
Activity
Freshness
Attend Future Festival