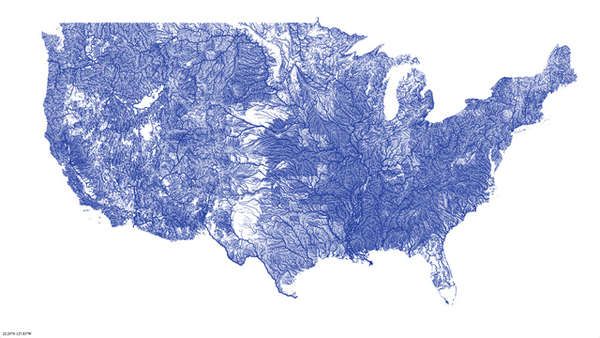 — June 29, 2013 — World
References: wired & laughingsquid
Share on Facebook Share on Twitter Share on LinkedIn Share on Pinterest
Illustrator Nelson Minar's latest creations are perfectly detailed river maps depicting every single river, right down to the smallest ford, in America. The rivers' snaking lines and acute angles give them a veiny feeling, as if this map depicted venules instead of bodies of water.

Minar wasn't intending to produce a piece of beautiful art with his 'All Rivers' series, but that was exactly what he got. As a self-proclaimed computer nerd, Minar just wanted to fool around on his computer to create a highly accurate map of all the rivers in America. He was not expecting the result to be so visually stunning. The twisting lines and soft blue hues of the rivers make these maps almost ethereal and reverential.

With his 'All Rivers' series, Minar has proven that technology can indeed be used to produce some gorgeous works of art. Minar has also proven that nature, as it exists organically and without meddling from humans, can create uncannily beautiful patterns that no human could imagine in their wildest dreams.
2.4
Score
Popularity
Activity
Freshness
Get Trend Hunter Dashboard