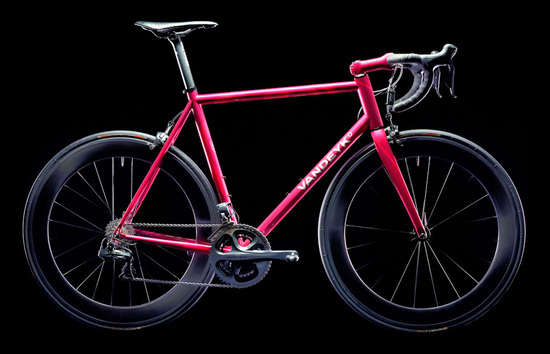 The Purple Blast Designer Bike Rolls in at $16,300

Made by Vandeyk Contemporary Cycles, Purple Blast is limited to 25 pieces and put together by hand in Germany. Vandeyk designed this bike as part of a collaboration with a variety of multi-disciplinary artists and experts to create a cross between design, art and functionality. The bike has electronic shifting technology with wiring carrying the signals throughout the frame. It also has Columbus XCr stainless steel frames and uses pieces from high-end manufacturers such as ENVE Composites. The bubble gum purple paint job comes courtesy of an unnamed “sophisticated” paint shop known for work on “super-sports cars.”

Also including a video production component to this launch, Vandeyk unveiled Purple Blast in a short film called NOWNESS, by United Visual Artists. Using a series of lighting patterns and a revolving wheel, the video is somewhat hypnotic and probably not suitable for anyone with Epilepsy.
6.1
Score
Popularity
Activity
Freshness
Get Trend Hunter Dashboard