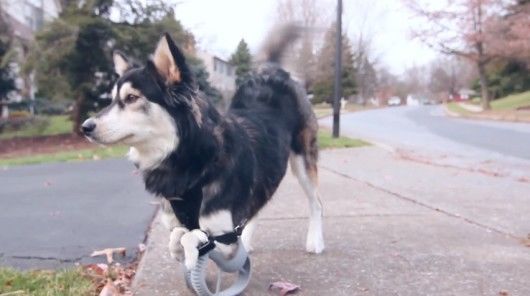 Derby the Dog Can Run Thanks to 3D-Printed Prosthetic Legs

Rahul Kalvapalle — December 19, 2014 — Lifestyle
References: 3dsystems & gizmag
Derby the dog isn't letting his congenital deformities slow him down. The pooch was born with very small forelegs and no front paws, but to his good fortune ended up in the foster home of Tara Anderson, who happened to work for 3D printing company 3D Systems (3DS). Anderson went about using her employer's technology to make Derby a set of prostheses which have since enabled him to run.

Anderson and her team began by 3D-scanning Derby's forelegs, before creating computer models of leg-attachment cups for the prostheses. A ProJet 3D printer was then used to create the physical prostheses. The cups were used in conjunction with rubber treads and rigid spokes, as well as a strap-based attachment.

Derby has since been given a permanent home, and runs two to three miles a day on his prostheses.
3.2
Score
Popularity
Activity
Freshness