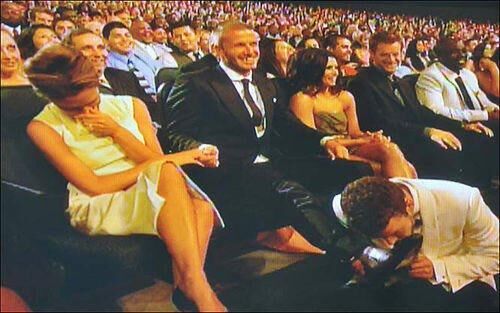 mediterranean — July 21, 2008 — Pop Culture
References: justjared.buzznet & victoriadavidbeckham.blogspot
Share on Facebook Share on Twitter Share on LinkedIn Share on Pinterest
It's no easy feat to make Victoria Beckham, not only smile, but right out laugh in public. However, Justin Timberlake was able to do just that as the host of the 2008 ESPY Awards. No, it wasn't because of his witty jokes or funny skits, it involved him smelling David Beckham's right foot.

It was widely reported in the media that Justin gave the foot a kiss, but as you can see from the above Jimmy Kimmel interview, he just smelled it. Timberlake claimed he wanted to find out what a $250 Million smells like, in reference to Beckham's reported LA Galaxy fat check.

And if you're wondering, David Beckham was wearing Tom Ford shoes at the moment of the sniff.

When Timberlake wasn't smelling people's feet, he was impersonating Jessica Simpson in drag and other sports icons. And ofcourse it wouldn't be complete without a replay of his Janet Jackson nipplegate.

Check out the gallery below for pictures from his 2008 ESPY Awards skits.
5.1
Score
Popularity
Activity
Freshness
Get Trend Hunter Dashboard