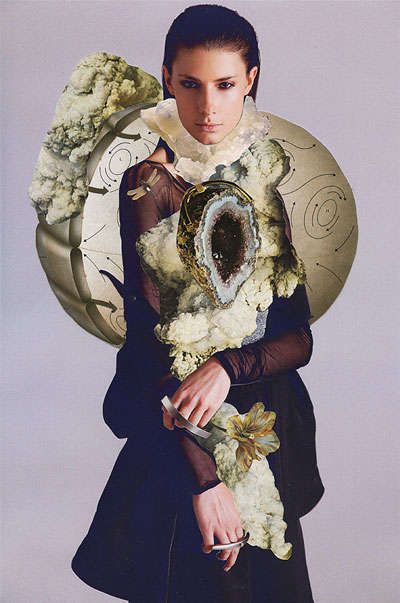 Meghan Young — April 4, 2013 — Fashion
References: ashkanhonarvar & behance.net
Share on Facebook Share on Twitter Share on LinkedIn Share on Pinterest
The photo series for Dash Magazine by Ashkan Honarvar, a fine artist based in Trondheim, Norway, follows the theme of 'Excess in Minimalism.' Although there appears to be a lot more excess going on than minimalism, that is simply due to the visually striking collages overlaid on top of the otherwise simple and elegant ensembles. As Honarvar writes, "Often, a strong impression can be heightened if contrast is perceptible."

Collaborating with photographer Alex Wessely, the editorial for Dash Magazine by Ashkan Honarvar stars model Frida. The outfits, which were styled by Patrik Guggenberger, have been accentuated with such nature-inspired images as flowers, clouds and gemstones. More eye-catching than a bold set of jewels, these handmade collages really do maximize the effect of the minimalist fashion.
6.5
Score
Popularity
Activity
Freshness
View Innovation Webinars