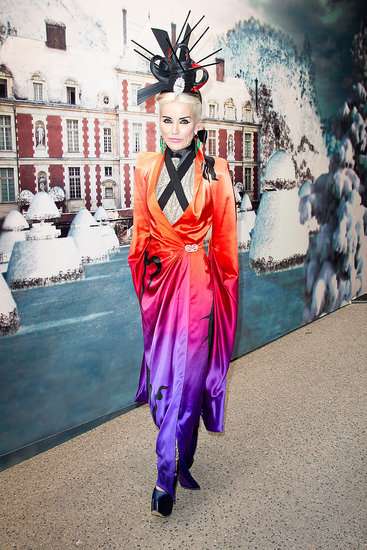 Souzan Michael — August 5, 2011 — Luxury
References: fashionologie & gitwiddit.blogspot
Share on Facebook Share on Twitter Share on LinkedIn Share on Pinterest
Fashion-lover and heiress Daphne Guinness was a close friend of the late designer Alexander McQueen. As the deceased designer's exhibit at the Metropolitan Museum of Art comes to a close, the Daphne Guinness Exhibit at New York's Fashion Institute of Technology (FIT) Museum is about to begin.

Opening on September 16th, 2011 and running through until January 7th, 2012, the Daphne Guinness Exhibit, which Guinness herself co-curated, will showcase 100 of her couture garments, including 24 never-before-seen pieces.

Daphne Guinness describes herself "not [as] a muse," but more like "a bee," which explains her love for and exploration of a wide variety of designers. This is clearly demonstrated in the vast collection of Alexander McQueen, Alaia, Tom Ford, Dolce & Gabbana, Rick Owens, Gareth Pugh, Chanel, Dior, Givenchy, Lacroix, and Valentino designs, as well as clothes Guinness designed herself, that will be on display.
4.8
Score
Popularity
Activity
Freshness
Attend Future Festival