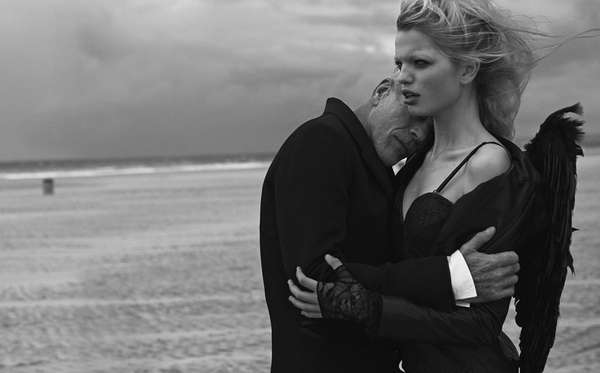 Meghan Young — August 27, 2011 — Fashion
References: peterlindbergh & fashionising
There is a sadness that permeates from the Daphne Groeneveld Numero photo spread that will surely seep into your own life, for just a moment at the very least. Although it is no one’s desire to feel as forlorn as these two impossible lovers do, sometimes such a cathartic release is needed, even in the depths of a fashion magazine.

Shot by Peter Lindbergh for the magazine’s September 2011 issue, the Daphne Groeneveld Numero photo spread also stars French actor Pascal Greggory. It appears that he has fallen in love with an angel, or at least a woman who believes she’s an angel. The gloominess of the day sinks into their expressions, creating an overall feeling of something heartbroken and lost. This dramatic narrative is beautiful captured.
4.7
Score
Popularity
Activity
Freshness