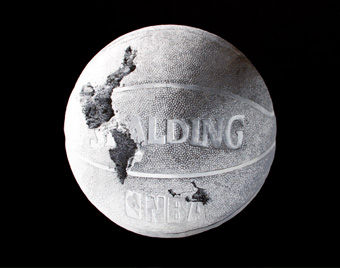 The objects are molded from geological elements such as obsidian, quartz, volcanic ash or glacial dust. The objects are cast at there original scale and appear as if they're deteriorating or un-finished. NBA basketballs, baseballs, a McDonald's sign, and Goodyear tires are just a few of the examples of the mass produced items that are so recognizable in American culture today.

OHWOW says, "these things translate our fickle attitude toward amassing possessions, visually editorializing the eventual disregard of everything we covet."