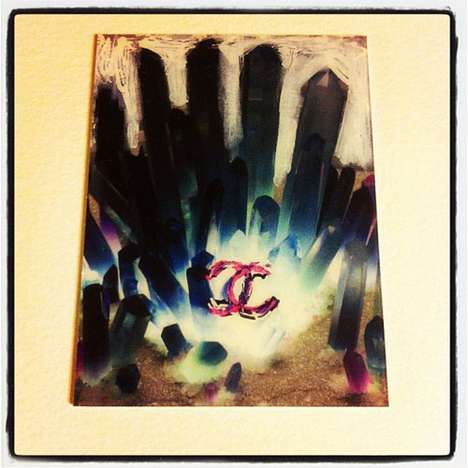 Jordy E — March 7, 2012 — Art & Design
References: chanel & graziadaily
Share on Facebook Share on Twitter Share on LinkedIn Share on Pinterest
Chanel’s contribution to Paris Fashion Week is always a highly anticipated event, and the iconic couture company's Chanel Autumn/Winter 2012 offering did not disappoint. In contrast to other designers who tend to devote the majority of their attention to make-up, models and all things mode, creative director Karl Lagerfeld has continuously delivered epic Chanel set designs. Although one would consider it close to impossible for Lagerfeld to outdo the grandeur of his past stages, the Chanel Autumn/Winter 2012 Paris show has put a quartz-like twist on the presentation of fashion.

Chanel’s invitation to its 2012 Autumn/Winter Paris Fashion Week display was a prelude to the architectural magic it was about to unleash. As the crowds of the fashion elite made their way to the show, they were greeted by a literal crystallized catwalk. Metallic tones of deep grey, dark purple and shadowy ash emulated from an array of larger than life cylinders lining the platform.