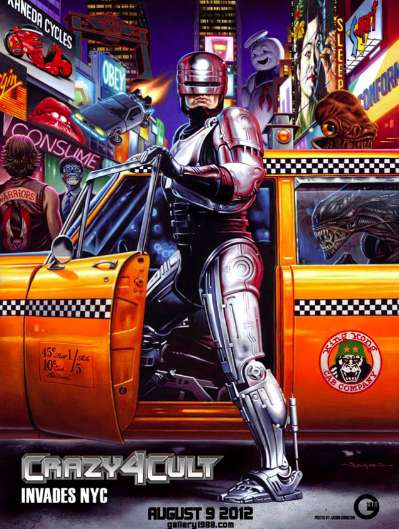 Jennifer Gosnell — August 5, 2012 — Art & Design
References: g1988.tumblr & laughingsquid
The 'Crazy 4 Cult: New York' by Jason Edmiston is an art exhibition happening in New York City that pays homage to some of the best cult classics of all time. The show itself features over 200 artists that each have their own artistic interpretation of the movies they have watched over the years. The show itself is on until September 1, 2012, and is being featured at Gallery 1988, a pop-up gallery.

New York has been home to the plot line of some of the most famous films of all time, which is why it is incredibly fitting that it would be the home of this exhibit. The exhibit officially opens on August 9th. Photos seen are credited to Jason Edmiston, Adam Limbert, Anthony Petrie, Jayson Weidel and Kiersten Essenpreis.
5.3
Score
Popularity
Activity
Freshness