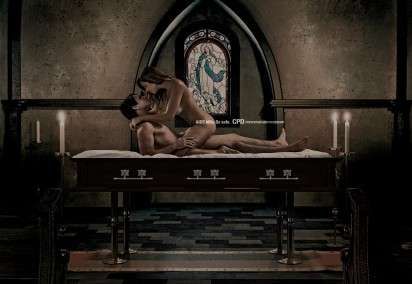 Meghan Young — May 23, 2011 — Lifestyle
References: rgacom.br & ibelieveinadv
Share on Facebook Share on Twitter Share on LinkedIn Share on Pinterest
Sometimes one has to be incredibly explicit when driving home a message and the CPD Prevention and Citizenship ad campaign is just that. It basically shows just how dangerous sex can be if the necessary precautions advised (such as using condoms) are not taken.

Considering that sex itself sells, the CPD Prevention and Citizenship ad campaign uses it to make their point. Conceived by Brazil-based ad agency RGA Comunicação, the two print ads show a sensual couple getting it on in otherwise unromantic settings. These settings include on top of a coffin and inside a grave.

Each image is paired with the slogan 'Aids Kill. Be Safe.' The CPD Prevention and Citizenship ad campaign was art directed by Alexandre Pons and photographed by NutsLocomotyva.
4.5
Score
Popularity
Activity
Freshness
Get Better and Faster