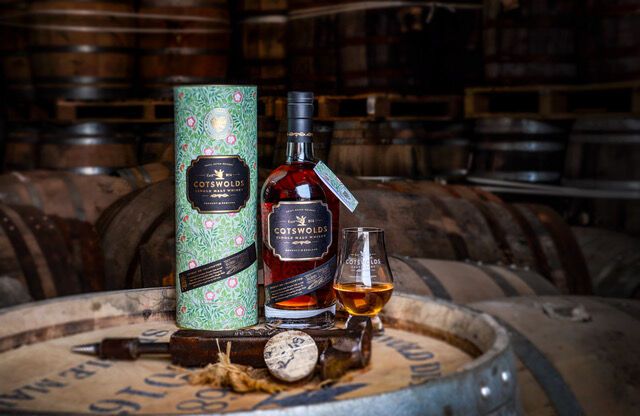 Grace Mahas — May 12, 2021 — Lifestyle
References: ilovewhisky.blog & thewhiskeywash
Share on Facebook Share on Twitter Share on LinkedIn Share on Pinterest
In celebration of St George’s Day, Cotswolds Distillery announced the launch of its second Heart and Crafts expression, a single malt whisky aged in Pineau de Charentes casks. The indulgent wine has been aged in the white grape Pineau casks, creating a slightly more bitter and tannic note than American oak casts offer. Ringing in at 55.2% ABV, the new wine boasts a warm long finish with hints of white pepper and almond that is complimented by a rich, caramelized aroma.

“I first started drinking Pineau on a trip to the beautiful Atlantic island of Isle de Ré, just off the cost of La Rochelle, in 1994 and I’ve always had a soft spot for it,” said Daniel Szor, Cotswolds Distillery founder. “Hence the excitement at the idea of aging our Cotswolds single malt spirit in these casks.”

The Cotswolds Hearts and Crafts Pineau de Charentes Cask is available to buy exclusively from the distillery in a limited run for £74.95 per 700ml bottle.