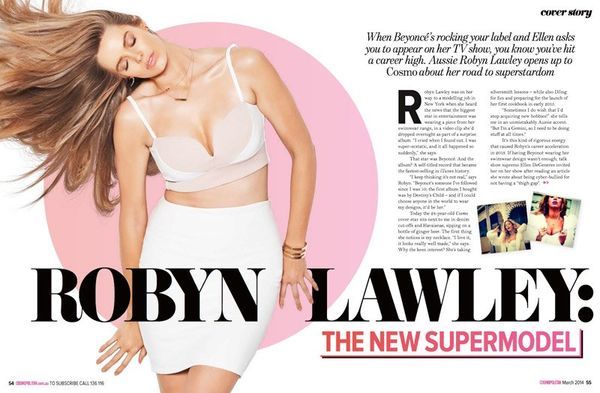 Meghan Young — February 3, 2014 — Fashion
References: cosmopolitan.au & fashiongonerogue
Share on Facebook Share on Twitter Share on LinkedIn Share on Pinterest
The Cosmopolitan Australia March 2014 cover shoot stars plus-sized model Robyn Lawley, a regular favorite of the publication. Although perhaps the term 'plus-sized' shouldn't be used in this case considering her aversion to it. She reveals, "Personally, I hate the term ‘plus-size’. It’s ridiculous and derogatory--it puts women down and it puts a label on them. I want to be the swimwear label that fits the best in the world. That’s my goal. Whether we get there, we’ll see."

Shot in a midriff-baring bustier and high-waisted white pencil skirt picked out by stylist Nicole Adolphe, the blonde beauty was captured by photographer Kane Skennar. Dubbed 'The New Supermodel' in the Cosmopolitan Australia March 2014 cover shoot, it provides a healthy for the female population. Lawley is still unattainably sexy, but with a real woman vibe.
3.3
Score
Popularity
Activity
Freshness
Jeremy Gutsche Keynote Speaker