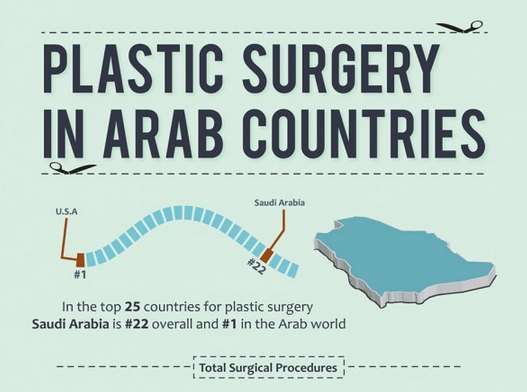 M — July 3, 2013 — Fashion
References: ishadeed & visual.ly
Share on Facebook Share on Twitter Share on LinkedIn Share on Pinterest
According to the 'Plastic Surgery in Arab Countries' infographic, Middle Eastern women are obsessed with having cosmetic surgery operations. With Saudi Arabia cited as the number one country in the Middle East -- and 22nd in the world -- to have cosmetic surgery operations performed, it is clear that Middle Eastern women are very concerned with their appearances.

With such a heavy-handed focus on the beautification of women in the Middle East, girls at a young age are heavily obsessed with the symmetrical appearance of their face and body. According to the 'Plastic Surgery in Arab Countries' infographic, one out of three women in Lebanon has had some sort of plastic surgery, and nose jobs and botox injections tie as the number one cosmetic surgery performed. With a colorful layout, interesting facts and simple schema, this cosmetic surgery operations infographic tastefully raises awareness about unhealthy body image issues.
5.8
Score
Popularity
Activity
Freshness
View Innovation Webinars