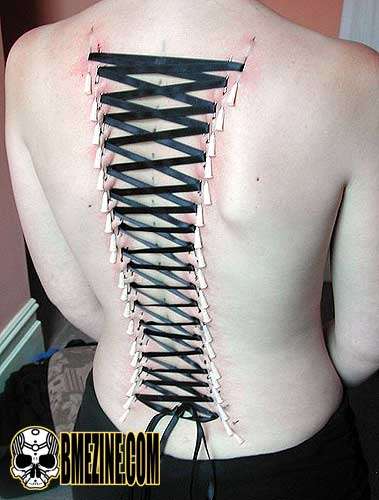 The corsets are almost always temporary and the strings or laces are removed after they have achieved their purpose.

The piercings for these creepy ornaments are performed with “captive bead rings” or syringes. After the piercings are done, then the jewelry, which almost always consist of rings, are put in place and arranged in a configuration resembling a corset’s eyelets. The final step is applying the colorful laces or strings through the jewelry and creating the illusion of a corset.

However, the kick here is that if the jewelry is left in place for a long time, there is a good chance that the body will reject it, resulting in scarification which can sometimes be severe.

Finally, it should also be noted that while the corsets are almost always placed on the back, they can also be applied on other parts of the body such as the arms as can be appreciated on the second image in the gallery.
6.7
Score
Popularity
Activity
Freshness
Attend Future Festival