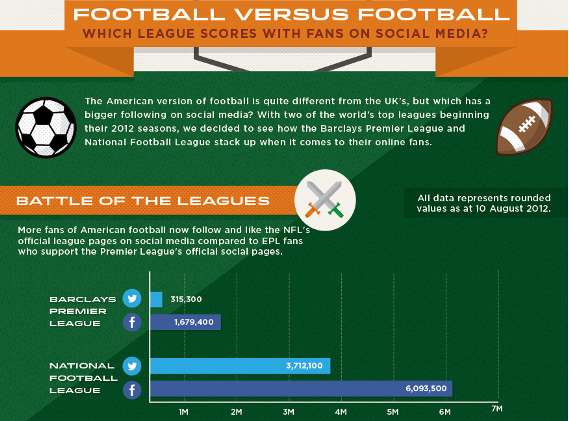 The 'Confused' Soccer vs. Football Chart Looks at Online Presence

Sarah Nazim — August 20, 2012 — Lifestyle
References: facebook & confused
The 'Confused' Soccer vs. Football chart compares the number of fans that each sport has on social media platforms. The two sites analyzed were Twitter and Facebook, and the analysis is based on the National Football League and Barclay's Premier League.

The word 'football' is used to either describe the American game that involves tackling, or the sport known as soccer. According to this study, the National Football League has a higher percentage of fan followers on both Facebook and Twitter.

When looking at the overall picture, including the cumulative league page and all the team pages accumulated, the Premier League comes out on top. It seems that soccer fans are more likely to engage with social media platforms, in comparison to American football fans.
0.5
Score
Popularity
Activity
Freshness