The Dude-Inspired Drink Holders
Next
Set of
Related
Ideas 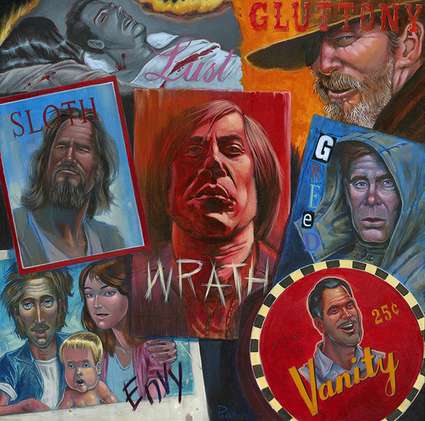 — June 17, 2013 — Pop Culture
References: ltdartgallery & laughingsquid
Share on Facebook Share on Twitter Share on LinkedIn Share on Pinterest
'Over the Line' is an art installation opening in Seattle that will pay tribute to two of the most influential directors of the past 20 years: the Coen brothers. Joel and Ethan Coen have brought the world films like The Big Lebowski and Fargo, both of which are critically acclaimed cult classics. Iconic characters like the Dude, from The Big Lebowski, and Margie, from Fargo, have permeated pop culture for years, inspiring everything from clothing to food.

Possibly the most stunning piece in the installation is one by Augie Pagan called 'The Seven Deadly Sins of Coen's Cinema.' This painting shows several of the brothers' most famous characters, each of which has been labeled as a deadly sin. The Dude, for instance, has been labeled as 'Sloth,' while Anton Chigurh of No Country for Old Me is labeled as 'Wrath.' This is a clever way to condense all of the Coens' movies into one cohesive unit, so that their oeuvre can be visualized as a whole.

With 'Over the Line,' it is clear that directors' efforts are not taken for granted. Directors are often heroes and mentors for their fans, proven by the slew of amazing art works in the 'Over the Line' installation.
0.9
Score
Popularity
Activity
Freshness
View Innovation Webinars