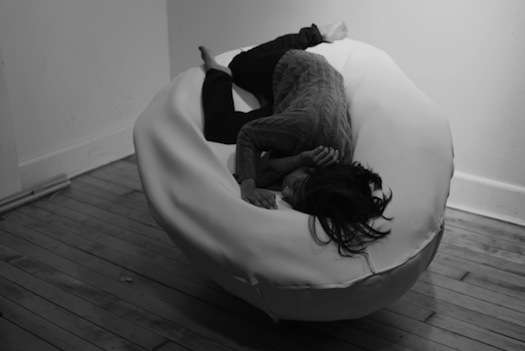 Meghan Young — June 27, 2012 — Art & Design
References: cargocollective & psfk
Share on Facebook Share on Twitter Share on LinkedIn Share on Pinterest
Cocooning by Filipa Tomaz, a graduate student at the Tisch School of the Arts in New York, is an interesting furniture series that addresses the feelings of restlessness, tension and anxiety, which are fairly predominant in modern societies. Linked to consequences such as sleeplessness, the collection hopes to alleviate these feelings by promoting other ones such as calmness and comfort.

Made up of three 'body-objects,' Cocooning by Filipa Tomaz centers around familiar forms in the modern habitat such as pillows and chairs. One of the pillows wraps around the body and reads muscle tension, which it then relieves by softly vibrating into Om while supporting the neck, sacrum and legs. An egg-shaped chair senses movement while rocking and creates a womblike experience by playing oceanic sounds as it settles back into stillness.
6.3
Score
Popularity
Activity
Freshness
Get Better and Faster