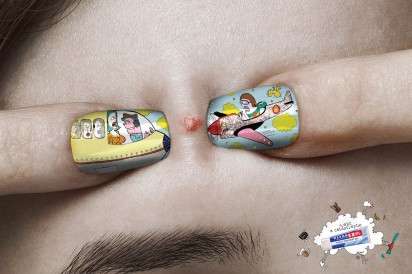 Meghan Young — April 19, 2012 — Marketing
References: yr & ibelieveinadv
Popping a zit can be as disastrous as the blemish itself, which the Clearex Pimple Treatment Gel ad campaign cleverly shows. It creatively relies on the nail art craze that has swept through the beauty industry of late. The print ads liken popping pimples to two other impending catastrophes, a plane crash and matador accident, which have been illustrated on the nails.