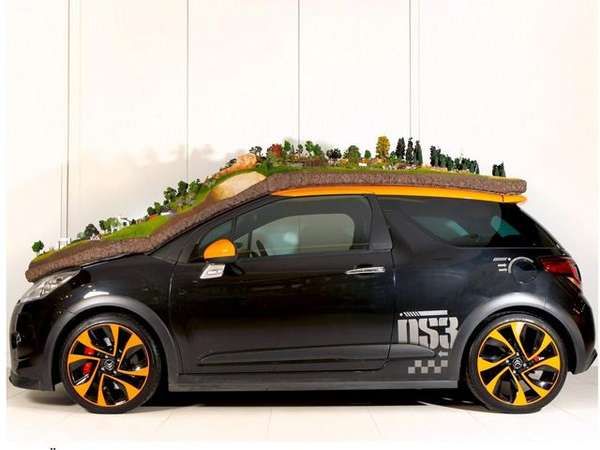 Michael Hines — March 9, 2013 — Autos
References: citroen & carbuzz
Share on Facebook Share on Twitter Share on LinkedIn Share on Pinterest
The Citroen DS3 rally diorama is an art car in the truest sense of the word. The French automaker turned its sporty hatchback into a motorized work of art to celebrate its impressive 21 world rally victories and its two World Rally Championships.

The diorama features nine different rally tracks, each one designed to commemorate one of the nine titles won by Sebastien Loeb and Daniel Elena. The diorama features tarmac, sand, dirt, gravel, snow and ice tracks and is 1:43 in scale. The Citroen DS3 rally diorama was created by Funky Lemon Design's Kieron Barter and took two months to create. The highly detailed model features a DS3 on each of the different surfaces and includes small models of people for added authenticity. The Citroen DS3 rally diorama was first shown at the Society of Motor Manufacturers and Traders in the UK.

After the show, the plan is to move the motorized diorama around to celebrate Loeb's and Elena's nine titles.
1.8
Score
Popularity
Activity
Freshness
Get Trend Hunter Dashboard