Top 40 Mobile Innovations in May 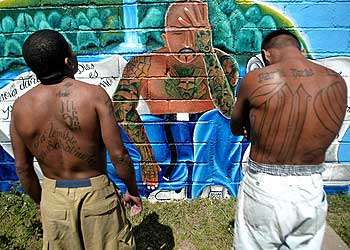 When Popping a Cap in Their Ass Doesn't Work Anymore

Ben Preiss — July 31, 2007 — Lifestyle
References: msnbc.msn & news.yahoo
Share on Facebook Share on Twitter Share on LinkedIn Share on Pinterest
Fort Worth and San Francisco are the latest cities to file lawsuits against gang members, asking courts for injunctions barring them from hanging out together on street corners, in cars or anywhere else in certain areas. Wait a minute, isn't this a bit extreme, did anyone try asking them politely first?

The following is an excerpt from MSN BC:

"Fed up with deadly drive-by shootings, incessant drug dealing and graffiti, cities nationwide are trying a different tactic to combat gangs: They're suing them.The injunctions are aimed at disrupting gang activity before it can escalate. They also give police legal reasons to stop and question gang members, who often are found with drugs or weapons, authorities said. In some cases, they don't allow gang members to even talk to people passing in cars or to carry spray paint.

â€œIt is another tool,â€ said Kevin Rousseau, a Tarrant County assistant prosecutor in Fort Worth, which recently filed its first civil injunction against a gang. â€œThis is more of a proactive approach.â€

But critics say such lawsuits go too far, limiting otherwise lawful activities and unfairly targeting minority youth. â€œIf you're barring people from talking in the streets, it's difficult to tell if they're gang members or if they're people discussing issues,â€ said Peter Bibring, an attorney with the American Civil Liberties Union of Southern California. â€œAnd it's all the more troubling because it doesn't seem to be effective.â€"