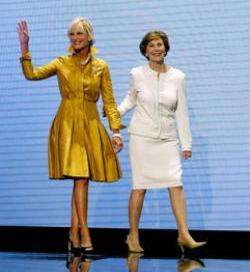 Elsa Blaine — September 5, 2008 — Social Good
References: vanityfair & luxist
Share on Facebook Share on Twitter Share on LinkedIn Share on Pinterest
If one was to replicate the fashions of Cindy McCain and Laura Bush at the recent Republican National Convention, we would have to shell out a total of over $300,000. Can the masses relate to the wealth of the McCain’s or could it be a turnoff?

To put this into perspective, Michelle Obama recently appeared on The View outfitted in a stylish ‘Black & White’ dress any one of us could buy for $148.

“One of the persistent memes in the Republican line of attack against Barack Obama is the notion that he is an elitist, whereas the G.O.P. represent real working Americans like Levi “F-in’ Redneck Johnston,” says Vanity Fair.
6.7
Score
Popularity
Activity
Freshness
Attend Future Festival Virtual