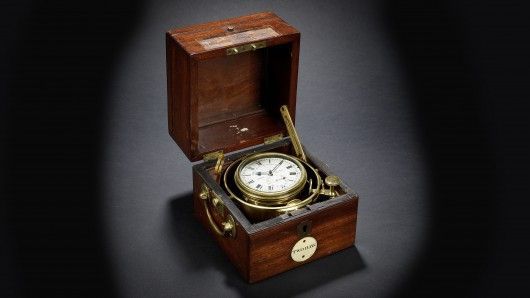 This Marine Chronometer Accompanied Charles Darwin to the Galapagos

The chronometer, believe to have been manufactured in 1825, accompanied Charles Darwin on his five-year voyage to South America and the Galapagos Islands between 1831 and 1836. It was also on hand during the North American Boundary Expedition (1843-1846) which established the border between the USA and Canada. Moreover, it was present during the 1857 survey of the Australian coastline.

Given its impressive historical pedigree, the chronometer is being auctioned off at an extremely low price. It is expected to sell for somewhere between $50,000 and $85,000.

The previously unrecorded marine chronometer is dated 1825 and signed by William Edward Frodsham. It was one of 22 chronometers aboard HMS Beagle (the ship which carried Darwin on his second voyage and also mapped Australia's coastline).

Given its stellar provenance, the chronometer seems ridiculously cheap if it does fall within its expected price range of £30,000-50,000. It is being auctioned off by the Bonhams auction house.
2.6
Score
Popularity
Activity
Freshness
Get Better and Faster