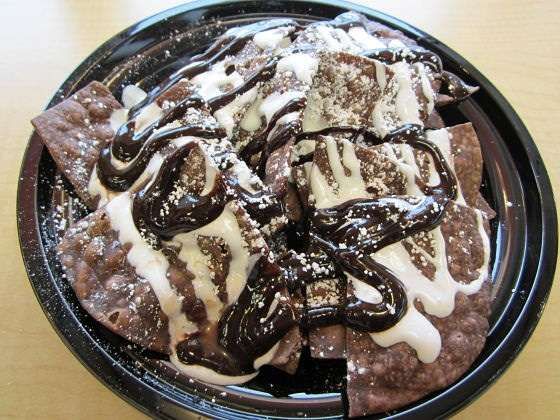 El Pollo Loco Serves Up Chocolate Nachos for the Holidays

Jonathon Brown — December 4, 2012 — Lifestyle
References: elpolloloco & foodbeast
Share on Facebook Share on Twitter Share on LinkedIn Share on Pinterest
In a hilarious attempt at merging the worlds of Mexican cuisine and holiday desserts, a chicken chain in the United States is now offering chocolate nachos as part of its holiday dessert menu. El Pollo Loco is known for it’s selection of Mexican-inspired chicken dishes like Stuffed Quesadillas, Chicken Burritos and Grande Tacos, but decided to take a sharp left turn into dessert with this menu addition.

Only available in limited quantities, the chocolate nachos are exactly what they sound like. A salty, sweet dessert snack, they are fried chocolate tortilla chips with fudge and “marshmallow” creme topping. The chips themselves are said to be fairly mild in their sweetness. The kicker is the topping, which amps up the sugar content drastically. Beware, this dessert dish contains over 1,100 calories!