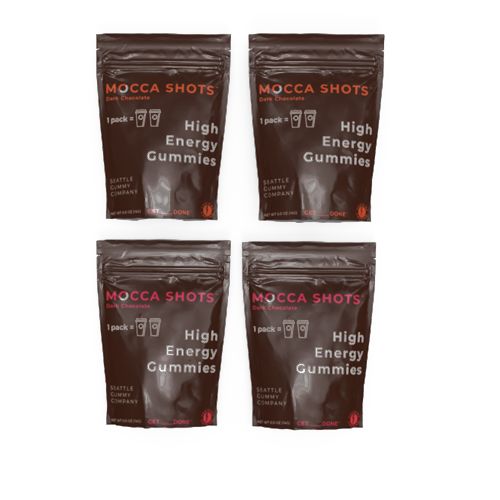 Laura McQuarrie — August 10, 2018 — Lifestyle
References: seattlegummy & prnewswire
Share on Facebook Share on Twitter Share on LinkedIn Share on Pinterest
Seattle Gummy Company's 'Mocca Shots' are being introduced as "a new product with the highest caffeine concentration available on the market," as each of the dark chocolate gummies provides 100 milligrams of caffeine—which is roughly equivalent to a cup of coffee.

The Mocca Shots are said to be more affordable and fast-acting than coffee, helping to improve one's focus and cognitive performance without the undesirable side effects like the jitters. Although dark chocolate is known to have a bitter flavor, Seattle Gummy Company's patented technology is non-bitter.

While caffeinated beverage take about 45 minutes to be digested and absorbed through the small intestine, Seattle Gummy Company notes that its Mocca Shots are quickly dissolved and absorbed by the tissues in the mouth and esophagus. These fast-acting caffeinated gummies specifically appeal to those who are looking for a convenient, mess-free, take-anywhere alternative to coffee.
4.5
Score
Popularity
Activity
Freshness
View Innovation Webinars