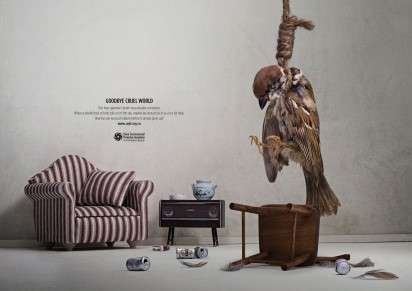 Meghan Young — March 29, 2012 — Eco
References: ogilvy & ibelieveinadv
Share on Facebook Share on Twitter Share on LinkedIn Share on Pinterest
As sad and depressing as the China Environmental Protection Foundation campaign is, it is also extremely eye-opening. More often than not, the cause of animal deaths is put in the hands of humans. In this case, however, animals are portrayed as committing suicide in order to leave their despairing circumstances.This ad campaign shows just how terrible human's environmental neglect can be if not recognized and improved.

The China Environmental Protection Foundation campaign was created by the Hong Kong branch of global ad agency Ogilvy & Mather. With the familiar tag line, "Goodbye cruel world," the campaign asks people, "How far can we push nature before it simply gives up?" It was created directed by Alvin Lim and Richard Sorensen.