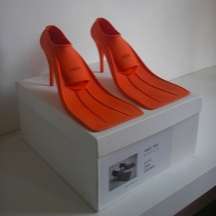 Elsa Blaine — September 8, 2008 — Eco
References: bookofjoe
Share on Facebook Share on Twitter Share on LinkedIn Share on Pinterest
‘High Tide Heels’ have been making the rounds of the blogosphere causing confusion as to who was the actual inventor of the footwear. Are they real or not? Where can I buy them? The high-heeled flipper shoes might be just the thing for a stylish scuba diver, more fashionable than adventurous and judging by the interest they caused, maybe someone should produce the webbed pumps.

Until recently Australian designer Lisa Carney had taken credit for the shoes however the shoes she designed (the ones worn by the model in the bikini) are obviously a different although perhaps more wearable design. It seems that ‘High Tide Heels’ are actually part of an art exhibition by a Belgium designer or group of designers, according to Snoops.com.

One photo I found showed a title “Global Warming Collection”. So, I assume the flipper shoes were an ironic comment on the suggestion the planet will be flooded due to extreme climate change. Form your own opinion, but the ‘High Tide Heels’ concept was successful at getting exposure and making people think.
4.7
Score
Popularity
Activity
Freshness
Jeremy Gutsche Keynote Speaker